1 hour ago
Opay Risks Ban from Google Play Store, Report Finds Them Guilty Of Offering Exploitative Loans
22 hours ago
Border Closure Is Not To Punish Ghana, Benin, and Other West African Nations – President Buhari
23 hours ago
My Husband and I Quit Our Jobs, Sold Our House, Car, and Moved In With My Parents, Sweepsouth’s Co-Founder, Aisha Pandor
1 day ago
Nigeria Internet Users Increases to 123.5 million – NCC
4 days ago
Google Becomes a $1 Trillion Company
4 days ago
Buhari Nominates IMF Executive Director as CBN Deputy Governor
4 days ago
Jumia Appoints Female CEO ‘Diana Owusu-Kyereko’ for Its Ghanaian Arm

Vice President of Nigeria, Professor Yemi Osinbajo, led a delegation for the official launch of a 7.1 MW solar hybrid plant at Bayero University in Kano State.

The power plant is currently the largest off-grid power plant in Africa. It is designed to serve the 55,815 students and 3,077 university staff.

This electrification project was designed and implemented as part of the first phase of the Energising Education Program (EEP), which covers the six geopolitical areas. The project just completed at Bayero University is the second to be completed so far.

During commissioning, a world-class renewable energy training centre was launched and 11.4 km solar-powered streetlights were also officially launched at the University. 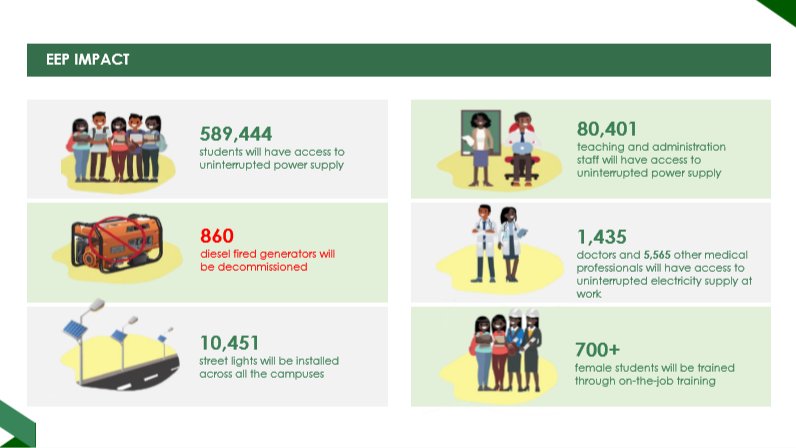 The target of the EEP is to deliver clean and sustainable energy to 37 federal universities in the country and seven teaching hospital over the next four years. The energy source can either be solar hybrid or gas-fired captive power plants.

The EEP is being implemented by the Federal Government under the Rural Electrification Agency (REA). The REA has been tasked with making sure the rural and underserved parts of Nigeria have access to electricity.

Speaking on the effects of the newly launched power plant on the environment, Mr. Evangelos Kamaris said it would go a long way in boycotting supply of carbon dioxide to the atmosphere.

“The state-of-the-art solar hybrid power plant will result in carbon dioxide savings of 108,875,120Ibs, a feat we as green contractors are proud of.”

The project elicited a lot of positive and excited reactions from staff, students and well-wishers of the University

According to the Managing Director of the REA, Damilola Ogunbiyi, the first phase of the EEP is fully funded by the Federal Government and will train 180 females in STEM education

According to the vice-Chancellor of BUK, Prof. Muhammad Yahuza-Bello, this new development in the state will further empower and encourage research in the institution.

As a result of the project, research laboratories can be open at all hours. This will impact productivity and efficiency, not to mention the N4.5 million electricity costs that will also be saved monthly.