Prince Harry and Meghan Markle’s 10-day tour of Africa has started, as the couple arrived today — and all eyes were on baby Archie. Royal fans and the media have been hoping to catch more than just a glimpse of the couple’s five-month-old but their arrival only offered a fleeting peek at the baby. 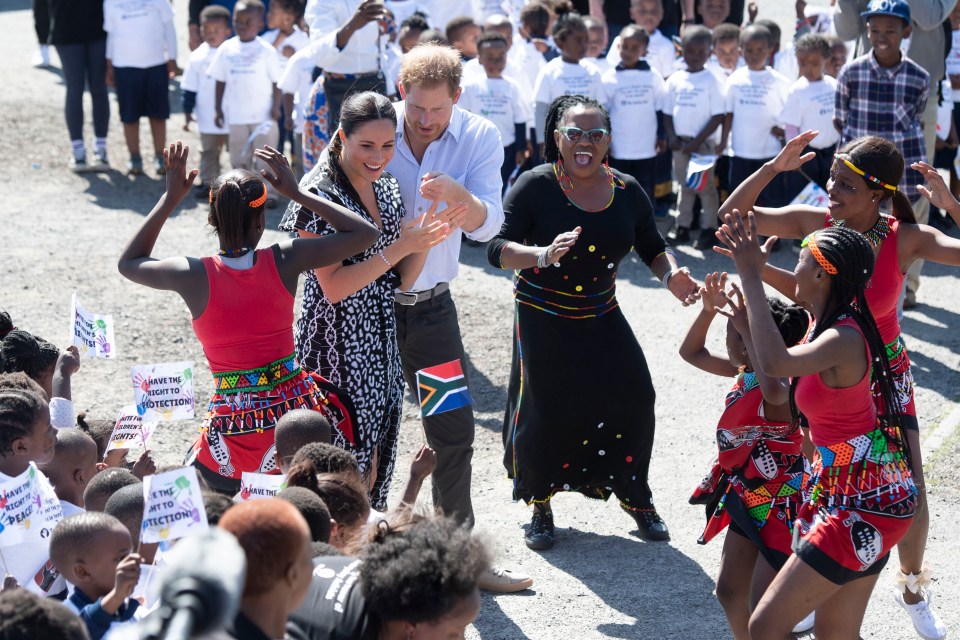 The Duke and Duchess of Sussex have kicked off their first official royal tour as a family with their son, Archie, in South Africa. Harry and Meghan were welcomed in Cape Town – their first stop on the 10-day tour – with music and dancing. @laurelirving7 #TheLatest #7NEWS pic.twitter.com/Rm5JbztyOa 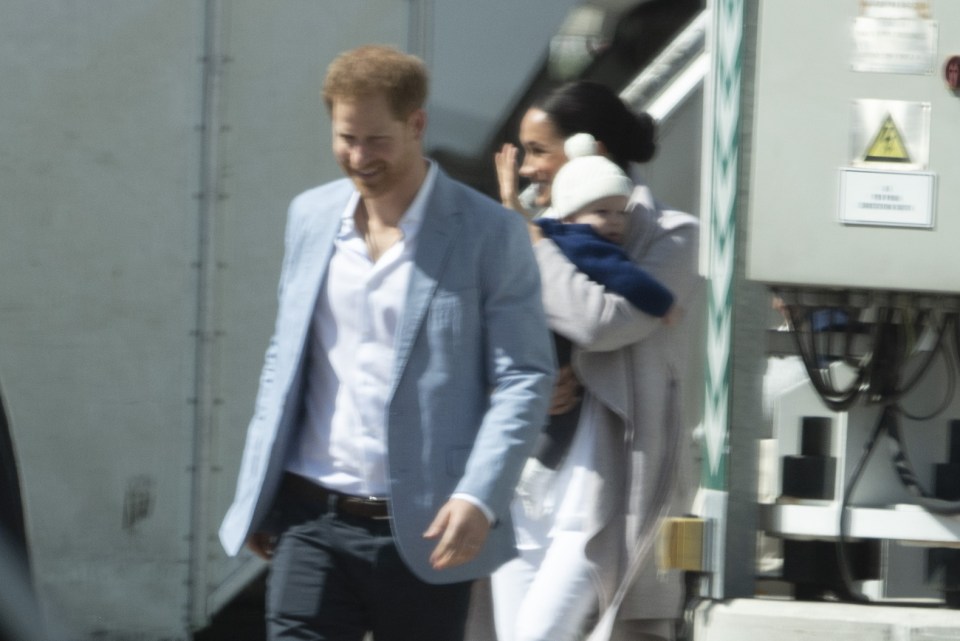 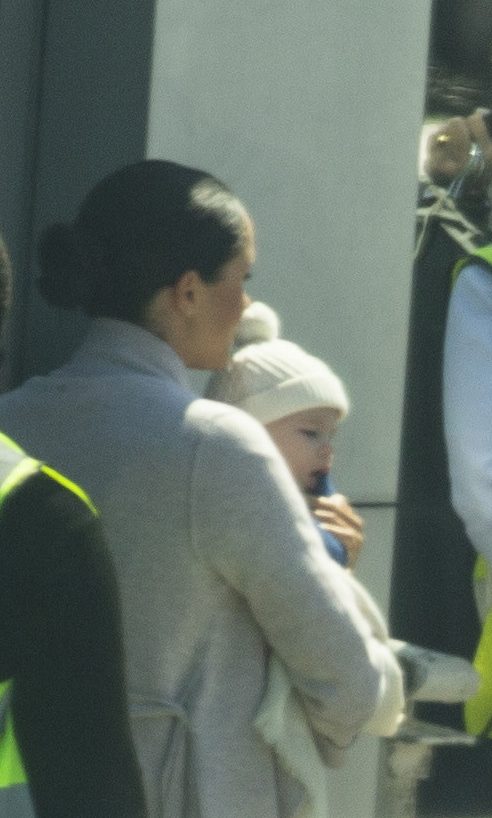 The couple had chosen to first visit the township of Nyanga, which is the murder capital of South Africa — a country itself known for having one of the world’s highest homicide rates.

They wanted to see for themselves the work of the Justice Desk, a human rights organisation helping youngsters and women who are often the victims of violence.

The charity is supported by the Queen’s Commonwealth Trust, which has Harry as its president and Meghan as vice-president.

They were greeted with hugs, kisses, female dances in traditional costume, musicians playing and ecstatic youngsters waving their national flag.

On a personal note while I’m here as a member of the royal family, I’m here with you as a mother, as a wife, as a woman, as a woman of colour and as your sister

"Meghan and I are inspired by your resilience, your sense of community and belief in a better future," Prince Harry (who stopped mid-sentence to pick up a little boy's flag) tells the women of the Nyonga township. pic.twitter.com/7OLksjTx9S

Harry first visited Africa when he was 13 and has since travelled widely across the continent. 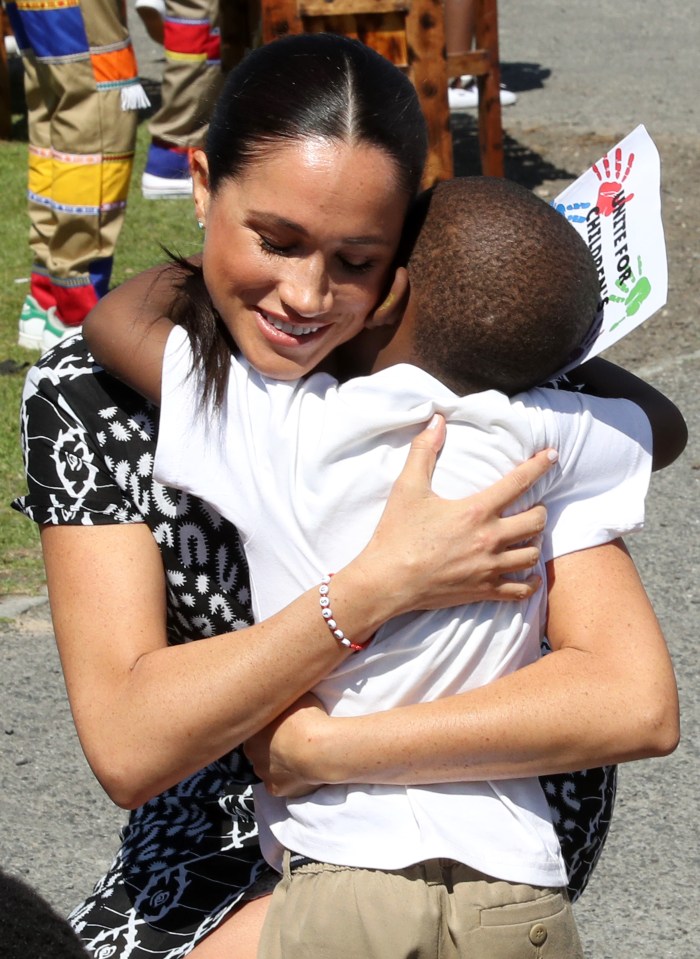 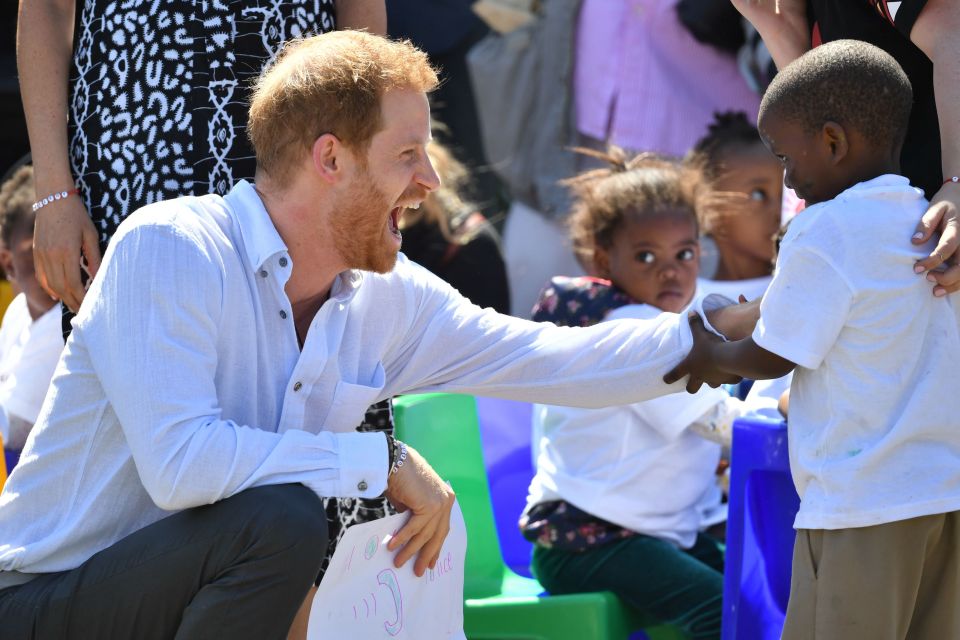 After spending a gap year in Lesotho, he jointly founded the charity Sentebale in 2006 to help support children affected by HIV.

Harry and Meghan holidayed in Botswana at the start of their romance in 2016, and returned as a couple the following year.

But the trip marks Archie’s first major public appearance since his birth in May.

At less than five months old, the baby will become one of the youngest royals to take part in an official visit.

The duke and duchess have largely kept their son out of the spotlight, and some royal fans felt cheated when his christening was held privately.

He last appeared in public on the sidelines of a royal charity polo match in July. 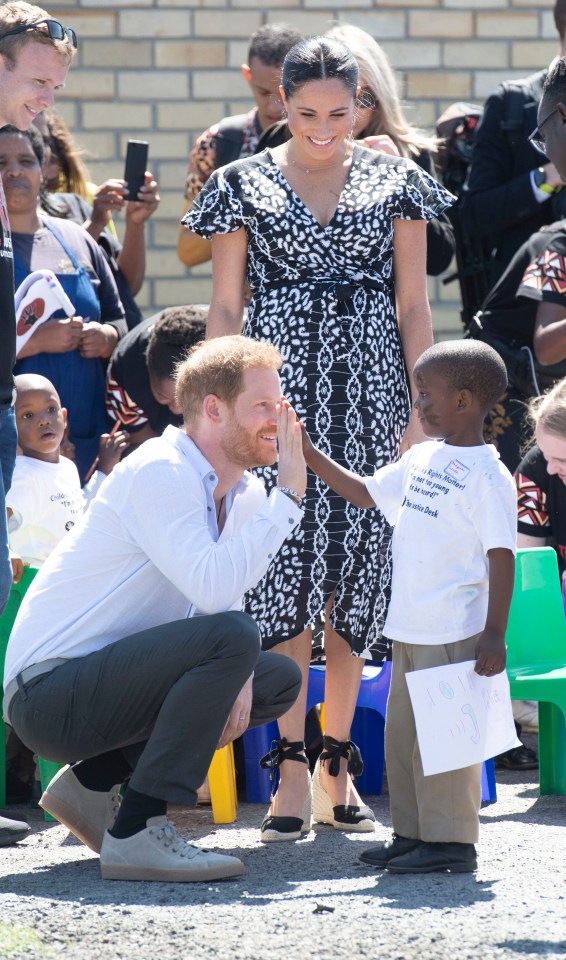 The start of their tour

They’re only on the first day of the tour, but among the many stops along their trip, Prince Harry will travel to Angola on Friday, where his mother had campaigned for landmines to be outlawed during a visit she made in 1997. He will also be opening a hospital renamed after Princess Diana in honor of her work. 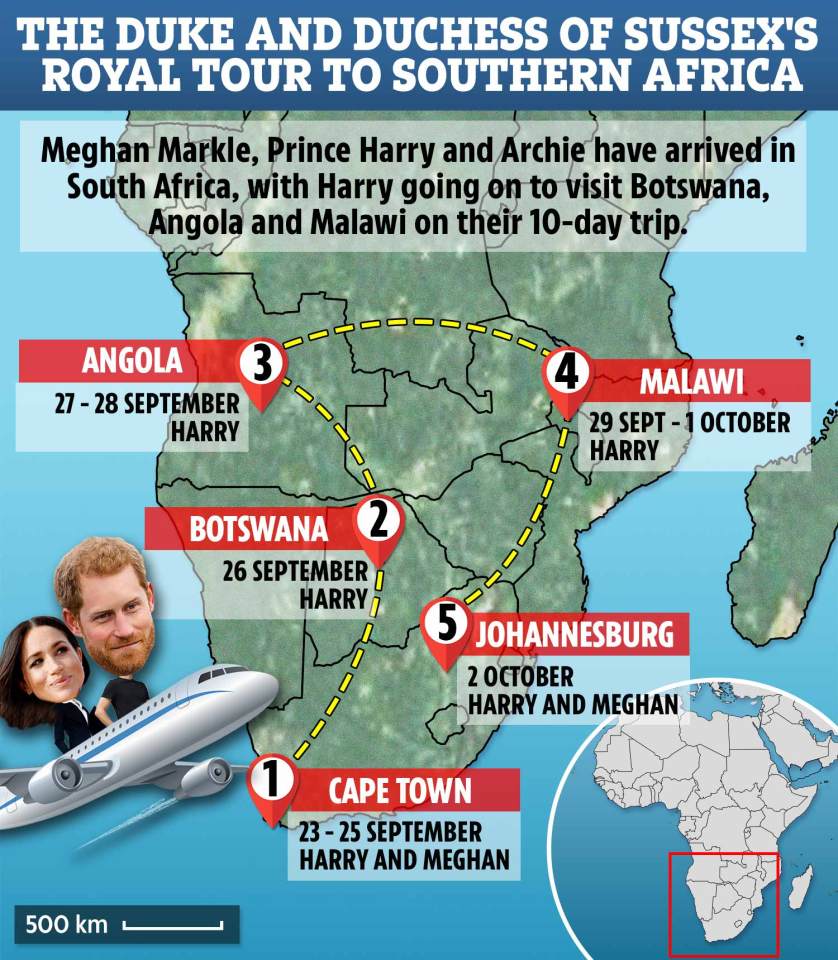 The duchess will remain in South Africa, where she will conduct various activities to raise awareness about women’s rights.

She and Archie will reunite with Harry in Johannesburg next week, where they will complete the last day of the tour together and fly back on October 2.

Harry last saw Tutu in Cape Town in 2015, when he presented the archbishop with an honour in recognition of his services on behalf of UK communities and international peace.

The buzz about Prince Harry and Markle in Africa hasn’t been all about Archie, however, as fans were won over by the couple sharing some sweet interactions with children, kneeling down to speak to and hug them.

They were greeted by a music and dance display at Cape Town’s Nyanga Township and even got in on a few dance moves themselves. 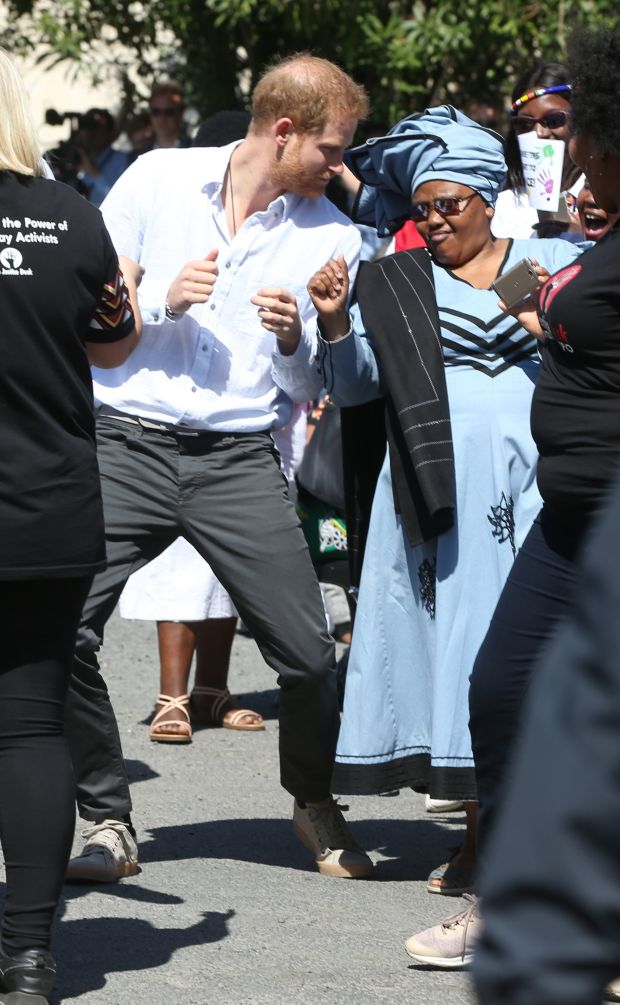 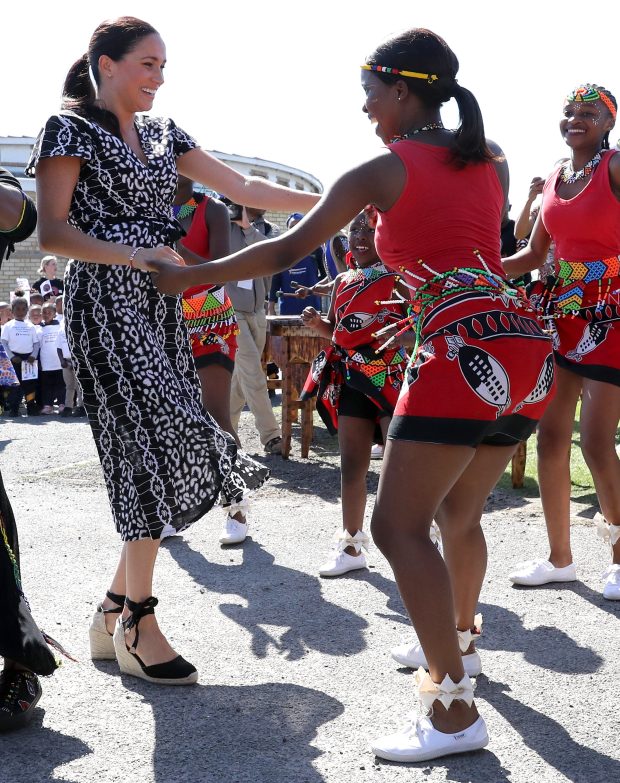 Prince Harry and Meghan concluded their first day in South Africa with a stop at the District Six Homecoming Center, where they were met by a small group of former residents of the neighborhood.

They joined a cooking activity and sampled some of the cuisine before departing.